How crowdfunding is helping a rural Scottish community green its future.

Recent figures published by Scottish Renewables yet again show Scotland to be the UK’s green energy powerhouse, producing enough to power all of Scotland’s homes twice over. The community of Coigach in the northwest Highlands is using crowdfunding to turn these high winds into economic regenerateration.

Up and down the country, small rural communities are struggling to make ends meet. With traditional industries like fishing and farming becoming less viable, people are having to look to secure jobs and income away from home. As the local population declines, it becomes harder and harder to rebuild.

Like many isolated communities Coigach faces numerous challenges. Located in the remote northwest Highlands of Scotland, the community has a declining population of around 260 and suffers from a lack of affordable housing, decreasing levels of health provision and a fragile economy which is over-reliant on external income from summer tourism. The iconic landscape draws visitors from around the globe, but decent and stable incomes remain hard to come by. 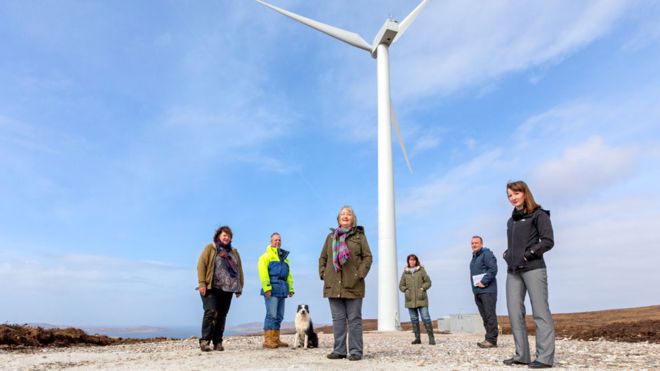 When the local school declined to the point that all the pupils could fit in a single room, a number of Coigach residents decided that enough was enough. Forming a Community Interest Company (CIC), they turned to wind power to help secure the future of their community. Funding the development through a series of grants and loans, the turbine—named Varuna—began “turning and earning” in 2017. All the profits from the project go to a local development trust that has so far developed two affordable housing units and workshop space for local businesses.

“We wanted to do something that would generate a bit of income that we could put back into the community,” says Iain Muir, director of Coigach Community CIC. “We saw that we needed to create opportunities in Coigach to get young families here, put kids into the school, and just make the whole place more viable, more vibrant, and more sustainable.”

One year on, the CIC is now refinancing the higher cost constructions loans through a £1.75 million bond. By paying off loans with higher interest rates, more of the revenue from the turbine can be invested directly into the community. The bond which is being promoted through the crowdfunding platform of Triodos Bank will pay interest of 5% a year increasing annually in line with inflation. The 12-year bond has a minimum investment of £250 and can be held in a Triodos Innovative Finance ISA (IFISA), meaning interest can be earned tax free. Like all ISAs, the IFISA has eligibility criteria.

Unlike bank deposits, an investment in Coigach’s bonds is not covered by the Financial Services Compensation Scheme. Payment of interest and repayment of capital are not guaranteed and are dependent on the continued success of Coigach’s business model. The bonds are not listed on a recognised investment exchange, so investors should be prepared to hold the bonds for their whole term.

Once the new lower cost financing is in place, the 500-kW turbine is expected to generate a £4.4 million community fund over the next 20 years. This will fund a host of redevelopment plans: more affordable housing, workshop space for new businesses, harbour improvements for our local fishing fleet, cultural heritage projects, environmental improvements and personal training, to name but a few.

The scheme benefits from the UK government’s Feed-in-Tariff scheme which guarantees inflation protected income for 20 years. It has generated over 800,000 kWh of clean energy to date.

“Community energy is a great way of generating funds for the benefit of the local community,” says Iain. “By supporting our wind turbine project, investors are not only investing in an operating asset and the generation of renewable energy but can also be assured that they are also helping us to tackle some of the most pressing issues our community faces.

“Triodos Bank is a natural partner for us as they combine financial and renewable energy expertise with a commitment to business as a means of benefiting the community.”

For the remote community of Coigach, positive energy is measured in more than megawatts—it’s the energy that drives their ambition for regeneration and the confidence that they’ve gained from turning a community dream into a reality. They hope that their success can inspire other rural communities to find a way forward by using green technology to develop their own sustainable economies.