Matthew Clayton, managing director at Thrive Renewables, explains why gas prices have a huge impact on the UK energy market and how investing in clean technologies helps lower prices.

Energy bills soared at the end of last year, primarily due to increased demand for gas globally. In addition to the appalling suffering of the local population, which has rightly taken centre stage, Russia’s invasion of Ukraine has brought with it further concerns about energy security here.

Ending our reliance on foreign fossil fuel imports is now a top priority for government, with prime minister Boris Johnson recently confirming that “Renewables are the quickest and cheapest route to greater independence…”. As we at Thrive have long advocated, increasing generation from cheap, clean, wind and solar farms is the only long-term solution to the energy crisis.

But why do gas prices have such a huge impact on the UK electricity market and how can investing in clean technologies protect us against future price shocks?

HOW THE ENERGY MARKET WORKS

Suppliers and generators trade electricity in half-hourly auctions, with the National Grid responsible for matching supply and demand. Bids for each half hour of demand are stacked in price order, starting with the least expensive and flexible generators, and the price is set by the last generator into the auction. As gas is one of the most expensive ways to generate power, and can easily be turned on and off, it tends to the be the last ‘unit’ of energy coming into the market at any point in time, and therefore sets the price. 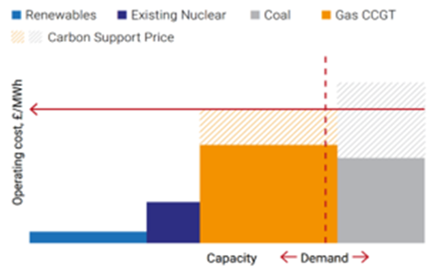 HOW CAN WE CURB RISING PRICES?

The government recently announced that its Contracts for Difference (CfD) scheme will take place on annual basis from 2023, which is positive news. The scheme is the government’s main mechanism for supporting the rollout of new clean energy projects which have high upfront costs and long lifetimes. Essentially a ‘strike price’ is agreed with the government so the generators have the revenue certainty they need to build the project. When wholesale prices are low - under the ‘strike price’ - the government makes up the difference to generators. But when they are high, the generators pay the difference back. This is good news for bill payers as it has the potential to protect them from price shocks in the future. For example, the scheme paid back £157million in Q4 2021.

There are other business models which can also help end our reliance on gas. Corporate power purchase agreements allow businesses to purchase electricity directly from a generator at a fixed price, providing certainty for each party. ‘Direct wire’ schemes can be even more effective; a clean energy project – wind turbine or rooftop solar PV array – is built on commercial premises, with the host business directly consuming the clean energy it generates.

We also need to ramp up UK storage capacity to make better use of electricity generated when it is windy and sunny. In December we commissioned our first battery project, and another 20MW site is currently under construction in Bristol.Electricity storage, be it battery or sustainable hydro, balances demand and supply, taking the place of expensive gas as the ‘top up’ for periods of peak demand.

The UK's electricity usage is projected to increase by almost 40% by 2035 as heating and transport transitions from fossil fuels to electricity. Ultimately, the way to avoid price shocks and increase energy security is to keep supporting the roll-out of clean technologies and implement stronger policies on energy efficiency. That way we not only reduce consumer bills but build a solid path towards net zero.
Back